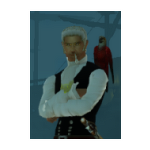 I have been sailing the Burning Seas on the Antigua Server since 2010 as a British Naval Officer (Jack McCullogh) and Privateer (Jackson McCullogh). My FreeTrader (Morgan McCullogh) was started simply to make cheap ships for my other characters to sail, but I ended up finding the economy to be one of my favorite aspects of the game. I avoid fighting with my FT whenever possible and consider him more of a gentile merchant.

I became a leader of an established society, the British Mercantile and Mercenary in the summer of 2010 and started a small wiki [1] there to help unify our focus during one of our busier periods. BMM is currently inactive, although Jackson still keeps a watchful eye over it. You can occasionally find me sailing with SGS these days on one of my NO's Jack or Michael McCullogh.

I adopted the PotBS Wiki in the spring of 2010 as all the previous Admins had not logged on in over a year. I focused purely on content updating, as I am not a great hand with computer programming and had absolutely zero experience with Wikis. My current role is more of a watchdog, keeping an eye out for malicious edits and editing posts to keep the wiki an objective tool usable by all.

IceCreamKitten came on board in December of 2010 and spent countless hours redesigning almost every aspect of the underlying code on the Wiki and really gave us an amazing look with great functionality. The rapid fire changes implemented in late 2012 by FLS forced IcK to re-evaluate his priorities and spend his valuable time on other pursuits. But we owe to him a great debt and hope that some day he will rejoin us here.

ClericTaven was one of the original editors here in 2008, his contributions numbered in the hundreds. He re-joined the Wiki as an Admin in 2012 and rounds out the current team.

Retrieved from "https://potbs.fandom.com/wiki/User:McCullogh?oldid=56833"
Community content is available under CC-BY-SA unless otherwise noted.