The Virginia Provincial Navy was founded on December 16th, 2011 by Captains Bradford Pierce and Franklin Van Valkenburg. In the context of role play, the squadron is comprised of British captains hailing from the American colonies, primarily Virginia. However, membership is not restricted to North American players. The squadron operates out of Guyana and focuses on PVP, RVR and group PVE combat, in addition to building economy and ships.

In general, the squadron is looking for members who:

In regards to role play, the squadron prefers members who:

The Virginia Provincial Navy, as a force serving the interests of the British Colonies of His Majesty, the King, under the jurisdiction and sponsorship of the Royal Governor of Virginia, patrols the Caribbean to protect all ships under the Union Jack. However, given the war against the French and Spanish, the squadron also coordinates with other squadrons stationed in the area to achieve strategic goals that could not be completed alone. If a squadron would like to coordinate with the Virginia Provincial Navy, contact the Captain Pierce or Commodore Van Valkenburg for further information.

Overview: The style of role play that the squadron has adopted does not require one to speak in 18th century mannerisms, but rather aims for the members to play as a character and not just a gamer. However, proper language (no internet lingo/slang/shorthand) is preferred. The squadron's role play does not require elaborate character biographies or backgrounds, nor does it require action reports and the like, however these embellishments would be accepted and enjoyed.

History: The Virginia Provincial Navy was established on the sixteenth day of December in the year of our Lord seventeen hundred twenty, for the purpose of defending Virginia and the interests of the Crown in the New World. The squadron operated primarily in North American waters, using the Chesapeake Bay as a base of operations, until being deployed to Caribbean station in opposition to increased Spanish aggression. The squadron was the product of the efforts of two men, Captains Franklin Van Valkenburg and Bradford Pierce, who believed in a more untraditional approach to naval warfare. In order to relieve the strains put upon His Majesty's Navy, the two men sought to allow privateers of good standing into the squadron alongside the King's officers. Consequently, though the privateers are not held to the same standards of naval officers, they are indeed under the military authority of the squadron's commodore.

Structure: The fleet consists of three squadrons comprised of naval officers, freetraders, and privateers, consequently requiring a unique chain of command. Commodore Van Valkenburg, being the senior naval officer and a co-founder, has overall command of the naval squadron. Captain Pierce, as a freetrader, has command of the logistical squadron and is chairman of the company's board. The privateers may lobby for their wants and needs through the Senior Captain present among them. In terms of mission assignment, the naval squadron is responsible for PVP, convoy escort, and pport flipping. The merchant squadron is in charge of the fleet's finances and building ships for its captains. The privateers are expected to harass enemy shipping via RVR and put enemy ports in PVP zones for the naval officers.

Naval Regulation: The naval officers in the squadron are expected to wear the proper uniform: a blue frock with brass buttons (the rugged duster in the character customization until a naval costume is obtained), a white waistcoat, a white pair of breeches (tight pants), a pair of black leather boots (no cuffs) or officers' shoes, a white officers' shirt and white neckcloth, and a black cocked hat (black trim for junior officers, gold for senior). Naval officers are also expected to paint their ships in accordance with Royal Navy tradition: black hulls with tallow (white or gray) below the waterline, yellow or gold trim and accents, red interiors, plain sails, and a Royal Navy ensign. All ships will be named with the proper prefix "HMS". 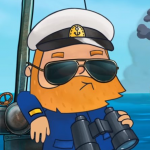