Mixed Mission
This mission involves both Avcom and Ship combat at various stages.

As I said, the third heir -- young Mary Somers -- has surfaced, and done so not far from Tortuga. Naturally, that arouses some suspicions on my part, especially considering she's taken over one of the many abandoned forts to the southeast. Now, this could well be a mere coincidence -- it's no secret young Mary is a pirate -- but the timing makes me suspicious.

I'd like ye to storm that fort, Captain, and ask the young lady personally just what she's about. Fight yer way through any guard ships and storm that fort. When you find Miss Somers, make sure she stays alive long enough to tell ye the truth.

Pointe Ouest
Captain Kidd has learned Mary Somers, the pirate daughter of his old enemy Captain Somers, has taken over a fort not far from Tortuga. He's asked you to storm the fort, find Mary Somers, and learn whether she's truly in league with the Earl of Shrewsbury and Lord Orford. If that means defeating her in single combat and interrogating her at the point of a blade, so be it.

When you enter the beach of the fort, you have a Marauding Captain to support you as well. 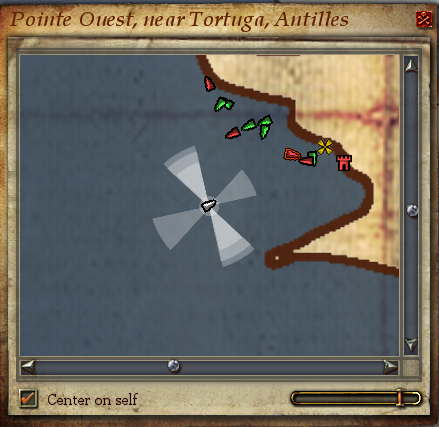 Community content is available under CC-BY-SA unless otherwise noted.
... more about "Proud Mary"
RDF feed
Accessible to
Britain +, Spain +, France +  and Pirate +
Action type
Mixed +
Is a
Mission +
Is level
34 +
Mission is started by
William Kidd +
Mission is started in
Tortuga +
Next
Vendetta's End +
Previous
Under the . . . Union Jack? +
Requires career
None +
Advertisement