"A King occupies the throne, but is never safe from being overthrown."

The Monarchy of Spain

Zudot de Viejo (pronounced Zudo) is the 32nd governor of Port-of-Spain and a captain of the Spanish Imperial Navy (SIN).

Known for his casual personality, he is often found participating in auxiliary activities for his nation rather than being at the forefront of conquest efforts.

It is rumored that he is a descendant of the Vikings, having origins rooted in Scandinavia as well as the blood of its earliest chieftains running through his veins.

The exact details of Zudot's childhood is relatively unknown. The King of Spain and his convoy, while travelling back through the mountainous regions of the mainland after suffering heavy losses in battle, found young Zudot abandoned in the streets of a deserted war-torn village.

Impressed by the young child's extraordinary ability to survive, The King personally took Zudot into his kingdom and raised him as one of his most trusted servants. Being assigned the role of "The Queen's Servant", Zudot was often tasked with assisting The Queen with her personal matters and guarding her in the event of an insurgency.

One day, after reaching a mature age, The Queen started taking interest in Zudot and began flirting with him while he was on duty. Late one particular night, The Queen sent a messenger summoning Zudot to her private quarters, mentioning of a "personal favor" that needed immediate completion.

With suspicion arising from the royal guards within the kingdom, The King and his commanders barged into The Queen's room that night and were shocked by their own sight. Enraged, The King immediately ordered the arrest of Zudot de Viejo and sent his military generals to arrange the execution ceremony, meanwhile placing Zudot in a maximum security prison cell.

Approximately 14 hours before his execution, Zudot faked a poisonous pipe leak in the walls of his prison cell and called upon the prison staff to investigate the hazard. Knocking the guards unconscious, he stole their uniform and secretly escaped the prison compound.

Learning of Zudot's disappearance through the prison warden, The King became increasingly frustrated and issued a formal decree that banished Zudot de Viejo from the mainland and barred him from ever returning to Spain.

Making it to the nearest docks, a disguised Zudot convinced a fisherman to lend him a boat for a mission dictated by The King's Orders, which he immediately used to set sail towards an uncharted destination, eventually finding himself in the waters of the New World... 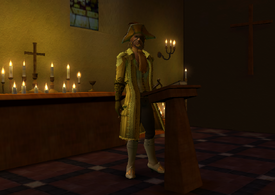 In an attempt to encourage international commerce at Port-of-Spain, Zudot de Viejo formally issued a takeover bid for the port on Aug. 7th.

Running uncontested, Zudot won the election with an influence bid of 101 - 0 against no political opponent or rival. By the 10th of August, Zudot was officially instated as the 32nd Governor of Port-of-Spain.