A Pirate Hunter on the dock of Port Royal is offering you a bounty mission against the Merrymen Pirates.

A band of murderers and cutthroats beloved of the landlubbers in port towns with high tax rates, for the portion of their loot the Merrymen share with the public in those towns, and the price breaks they offer in the Black Market, keep many alive and able to make ends meet. The Merrymen have a certain Robin Hood nobility, I suppose, until you see them slaughtering entire noble families for a single purse of doubloons. I hear some locals are known to direct them to likely targets, though nothing has ever been proven. If it was, the gibbets would be filled to bursting.

This is a bounty mission against the Merrymen that can be used to raise your standing with the Brethren of the Coast and British Navy as well the Board of Marque British Privateers.

Captains will drop an additional mission item Trophy: Mask of Infamy -- click for a turn-in Bonus.

"This mask, once worn by the now deceased captain of the Merrymen Redistribution Vessel, should be sufficient proof of your deeds against the Merrymen. Surely the Pirate Hunter in Port Royal will want to hear the news of your victory."
Reward: 2825 Doubloons 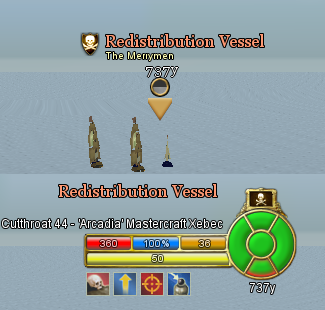 Community content is available under CC-BY-SA unless otherwise noted.
... more about "Merrymen Bounty"
RDF feed
Accessible to
Britain +, Spain +, France +  and Pirate +
Is a
Repeatable Mission +  and Mission +
Is level
40 +
Mission is started by
Pirate Hunter +
Mission is started in
Port Royal +
Requires career
None +
Advertisement