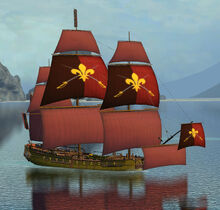 La Confrérie Libre is a major Pirate Gang whose ships patrol the Antilles from Irish Point to Bridgetown.

Their special ship is the Chariot, which drops Trophy: Bottle of Médoc (+200 reputation with Salon d'Aventure).

The reputation earned by defeating a Confrérie Libre is divided up among the following factions:

The mission La Confrérie Bounty may be obtained from the Pirate Hunter in Pointe-à-Pitre.

Notabe items that can be looted from Confrérie Libre ships include the following: