The Economy of Pirates of the Burning Sea is mostly player run. The large majority of items in the game are created by other players, and, in turn, they are supplied with raw materials from others players. With the introduction of the 2.15 Economic Expansion, the developers have added numerous new structures and recipes which includes several Auction House Buy Orders for non build dependent Trade Goods.

In order to start construction, a port must have a warehouse, as well each City Resource listed on the deed. In addition, each deed requires commodities and doubloons. While rolling over a deed in inventory, each requirement will be listed in green is it has been met and red if it is unsatisfied. Once all requirements are met, the structure can be constructed by using the deed while the player is in the correct port. All commodities are consumed when the deed is used, and most structures take one hour to be constructed, with the notable exception of the warehouse as well a few other structures.

Every structure has an upkeep cost, which must be paid every week. This cost is both listed in the UI Economy screen as well at on the deed. The upkeep may be paid in advance to allow for structures to remain open for longer periods of time.

Once a building is constructed, it begins to accumulate labor hours regardless of whether the owning player is logged into the game. There is a max of 72 accumulated hours. These hours are used to create items with the help of recipes. The crafting of an item requires the appropriate recipe, which may be obtained from reading the appropriate book. Each recipe requires commodities and doubloons just as construction does, but they also require labor from the appropriate structure. When a recipe is used, the labor is deducted from the structure's labor pool and commodities are used from the port's warehouse as well as the player's inventory. The output from a recipe is available immediately and is placed in the player's warehouse.

Items may be sold through many channels. The most direct, but often the least convenient way to trade goods, is through direct trade with another player. However, this only works when both parties are standing in the same port and have worked out the details of the trade through chatting. Note trading with the enemy is not tolerated and you will incur a penalty with your Nation's Reputation!

Alternatively, every port has an Auction House ran by the local "Trade Union", whereby a seller may put a good up for a price he is willing to sell it for and buyers submit their acceptance to pay for those goods. If your Trade Union Reputation is not at least indifferent (-499) in that shop, you are prohibited from selling in that port. Of course, you can try a different Port where your business is desired. 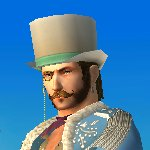